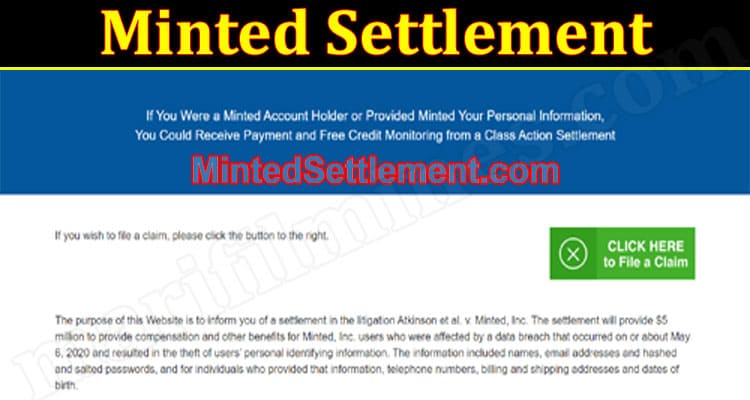 Minted Settlement (June 2021) Know The Legal Process! >> Know if this settlement has the structure to provide guidance to other security breach cases involving CCPA.

However, recently the company’s name is again on headlines due to the upcoming court hearing of Minted Settlement for the scam.

The brand organizes monthly design challenges, and the public’s votes decide the winner. Then the brand produces the winning artwork as stationary.

The company was established in 2007, and its headquarter is situated in San Francisco, California. The company also has its official accounts on Facebook and Instagram.

What Is This All About?

On 11th June 2020, a putative class action under CCPA was filed by a plaintiff against Minted, Inc. The Minted Settlement is related to the allegation that the company has failed to protect the personal information of its customers.

According to the reports it is said that on or around 6th May 2020, a group of hackers called ShinyHunters stole the personal information from the website of Minted and then tried to sell these data on the dark web. The plaintiff’s allegation says that the company’s negligence and lack of security measures are responsible for this.

This security breach has impacted nearly 4.1 million people who are residents of the US and hold an online account on Minted or have provided personal information in there on or before 27th June 2020. Though the company has agreed to the Minted Settlement, they have denied all the allegations and provided assertion for many defences. The settlement does not indicate any violation of laws or acceptance of allegations by the company.

The CCPA or The California Consumer Privacy Act was implemented to secure the personal information of consumers. The act went into effect on 1st January 2020. It provides the customers with compensation up to $750 per security breach caused by the failure of any company. The lawsuit against Minted is also filed under CCPA.

What Does The Settlement Offer?

Within a year of filing the lawsuit, both the parties reached the Minted Settlement. Under this agreement, the company will pay a compensation of $5 million to the class members in cash and credit service.

In addition, the company will also have to implement some mandatory security measures and will offer the affected customers’ credit monitoring and personal identity restoration services.

If anyone is not interested in the compensation, they can request exclusion within 16th September 2021.

This settlement has received its preliminary approval on 14th May 2021 and is now waiting for final approval from the court. Since the implementation of CCPA, hundreds of cases have been filed against a security breach.

The Minted settlement is one of the first among many data breach cases that are anticipating settlements. Here you can get more details on the settlement of litigation.