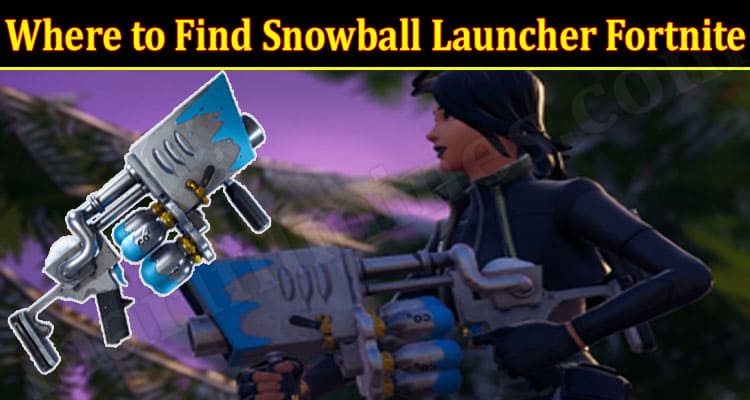 The guide shares the tips on Where to Find Snowball Launcher Fortnite so that players can have their launcher in the game.

The winter event has started in Fortnite’s Chapter 3, giving access to several new items, and challenges to explore for worldwide players. The Winterfest event unleashes a variety of tasks and quests that reward the players with massive XP that help them cross through the season one Battle Pass quickly.

What is Snowball Launcher in Fortnite?

Snowball Launcher is the explosive weapon found in the seasonal events of Fortnite. The weapon was launched back in Season 2, and it is obtainable during the Winterfest Event or other selected winter events.

Snowball Launcher is the customized version of Grenade Launcher with the exotic version called the Big Chill. As the name goes, the launcher shoots out a snowball projectile affected by gravity. It explodes when it hits the ground, dealing huge damage to enemies and the structures that come on its way.

The snowballs can also explode in between air when close to the enemy.

Where to Find Snowball Launcher Fortnite – The Location!

Snowball Launchers are the rare weapons that are only available during Winterfest Event. It is available in the treasure chests, or players can obtain it via floor loot.

The weapon comes in a rare chest treasure. Some players have to find the weapon on the ground across the game map. Sgt Winter also hands out a Snowball launcher from his truck’s back.

As per the instructions of the second stage of the Winterfest quest, players must deal around 50 damage using Snowball Launcher.

These are the tips on Where to Find Snowball Launcher Fortnite. However, there is a drawback of the launcher, and it is the speed which is very slow than other weapons in the game. Plus, the Snowball Launcher lacks the required bounce, and hence players have to aim precisely before triggering the launcher.

Where to Find the Chest for the Snowball Launcher?

There is no specific location Where to Find Snowball Launcher Fortnite and the treasure chest. Players are required to search for the chests.

Another way is to see how other players have found the treasure chest or the snowball launcher so that you can get it for yourself.

Since Snowball Launcher is the rare and unique weapon in the game, players are eager to have hands-on experience with the launcher in the gamer. But, you have to understand that it is a rare weapon found only in a treasure chest or as floor loot.

There are a few tips on Where to Find Snowball Launcher Fortnite that you must use to get your launcher in the game during the Winterfest Event.

Do you already have the snowball launcher in the game? Then, please share your experiences in the comment section.