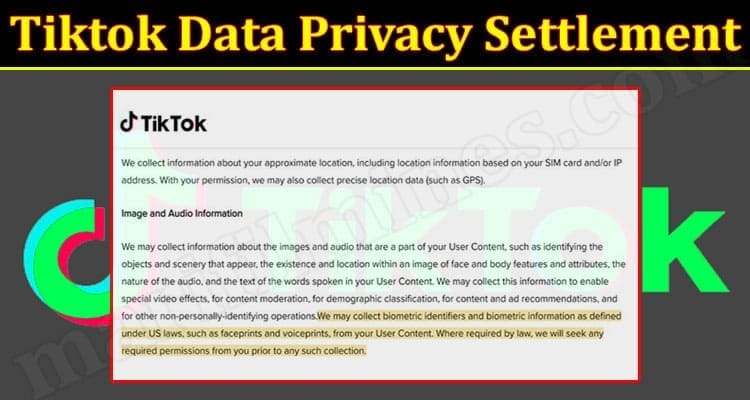 The guide shares details about the Tiktok Data Privacy Settlement and how people can become a claimant for the settlement payout.

Since November 15th, people in the United States have received a notification related to the class-action lawsuit settlement, making many people confused. TikTok users are getting notifications claiming that the recipients are eligible for a class-action settlement payment if they used the application before 1st Oct 2021.

TikTok is one of the popular social media and video clip-sharing platform. The platform is packed with multiple viral dances, recipes, trends, and more. Presently, the application is under serious scrutiny after notification sent to users claiming that they are eligible for a Tiktok Data Privacy Settlement if certain conditions are met.

As mentioned, since 15th Nov 2021, the users of the TikTok App across the United States are getting notification regarding a Class-Action Lawsuit Settlement, claiming that eligible users may receive a settlement payment if they have used the app before 1st Oct 2021.

The notification is sent via text message, comprising a link redirecting the users to the website detailing the settlement payment.

A class action complaint has been filed by users in Illinois against TikTok App, claiming that the application has violated state and federal law by collecting and using users’ private data without consent and notice.

How Much Money Claimed from Tiktok Data Privacy Settlement?

As a part of the class-action settlement, residents who have been using TikTok app on or before 30th Sept 2021 are eligible to submit a claim to receive the payment from the class settlement.

The case is still on trial, and if it gets approved by the court, Class-Action Settlement may lead to a payment of $92 000 000 to the claimants. However, the payout to the individual claimant would be far less, especially if 130 million monthly users of the app file a claim. Each would receive a payout of 70 cents, in that case.

However, claimants in Illinois would get 6 × amounts from the Tiktok Data Privacy Settlement, as stated on the settlement website.

What is the Deadline of the Class-Action Settlement?

So, anyone who wishes to file a claim or exclude from the settlement benefits or want to write to court about their dissatisfaction with the Tiktok Data Privacy Settlement needs to do the needful within 1st March 2022.

How are People Reacting to the Class-Action Settlement Notification?

The class-action settlement notification has been distributed via social media and text messages. Soon after spreading the news, many humorous memes were created on social media.

Some people are enquiring whether the notification is true or fake, while others create memes to make fun of it.

The class-action settlement comes after the TikTok App met with a lawsuit for users in the UK and EU, where users claimed that the app had been illegally processed the data of minor users.

Now, the app has been targeted by users across America. Those eligible for the Tiktok Data Privacy Settlement payout must file their case on the Settlement Website to participate in the settlement.