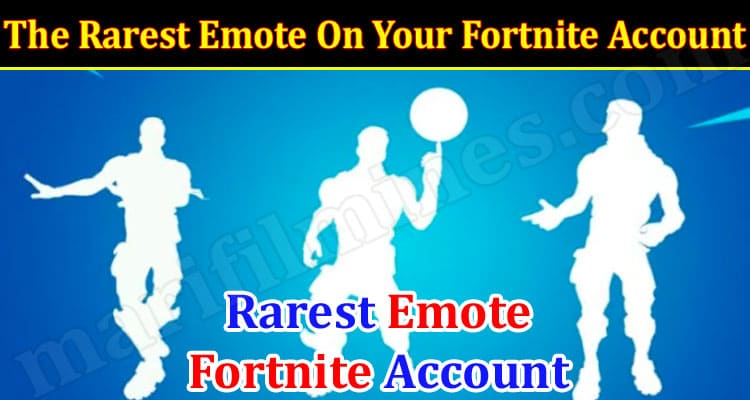 Fortnite has been around for a long time and has been getting updates nearly every month. There are hundreds of dances and emotes players can add to their Fortnite accounts. Fortnite also has plenty of skins for players to obtain. Most of these can only be bought from the Fortnite item shop. Meaning that anyone can buy them and have access to them. So, for an item to be rare, it usually only comes to the store every once in a while.

This is the only possible way to assess how rare emotes are. To judge how long it hasn’t been in the store since its last appearance. Considering some emotes haven’t been in the store for close to 3 years, I think it is safe to say those are pretty rare. Sometimes it is with good reason. Epic Games have been sued a lot for multiple dances. It is mostly a copyright issue; this might be a reason why some don’t come back to the store.

Alright, let’s jump into some rare emotes and then the rarest emote in Fortnite.

What are Some Rare Emotes In Fortnite?

Before we get into the rarest Fortnite emote, there are other emotes and dances that are just as rare. If you want to know what the rarest emote in Fortnite is then skip to the next section. However, you should check out the following list and see if you have any of these incredibly rare emotes on your Fortnite account.

This emote was introduced in Chapter 1 Season 2. A lot of people will know this as Carlton’s signature and iconic dance from the Fresh Prince of Bel-Air. Carlton would perform this dance almost any time a song would play, especially if it was a Tom Jones song. This emote hasn’t been in store for a little over 1300 days. If you have this dance, it means you have been here since the beginning.

Here is another great emote. This emote emulates Snoop Dogg’s dance from the 2004 hit song “Drop It Like It’s Hot” featuring Pharrell Williams. This dance was popular in the early 2000s thanks to how simple it is to do. Also, Snoop Dogg makes anything look cool.

As far as I know, this emote doesn’t reference any pop culture tv shows or movies. However, it does seem to be a nod to the wacky waving inflatable tube men seen outside of shops and stores.

This emote is an original that is part of the Avengers set. It is a nod to Black Widow’s skill set from the Marvel movies. Using this emote will have the player perform a spin kick, air flip, into a sweep, and ending in Black Widow’s classic superhero pose. At the time of this writing, this emote hasn’t been seen in 1144 days.

What Is The Rarest Emote In Fortnite?

We have finally come to the thing you all have been waiting for. The rarest emote in Fortnite. The following Fortnite emote hasn’t been seen in the store for an incredibly long time. If you are younger, you might not know what this dance is referencing. But the ’80s and ’90s kids should know exactly what it is from. It comes from a hit ’90s sitcom.

This emote is considered the rarest emote in Fortnite. It hasn’t been seen in the shop since November 12th, 2018. That means it hasn’t been available to buy for 1319 days at the time of this writing. That’s 3 and a half years.

This is another emote that was first seen in the Fresh Prince of Bel-Air. Will performs this dance in the episode he first meets Jazz. In the scene Jazz starts playing the drums in Ashley’s room, Will starts doing this wild and hilarious dance.

If you have this on your Fortnite account, then congratulations, you have one of the rarest emotes in the game. Trying to use this emote to distract your enemies isn’t a good idea, but this emote is perfect after getting a win. The opponent can only respect you after seeing this dance.

At the time of this writing, it seems like Rambunctious is the rarest emote. It hasn’t been in the shop for 3 and a half years. That is ridiculous. With it not being in the store for that long, it could be possible to see it soon in the Fortnite item shop. Then again, it might just never come back, no one knows. So, if you are one of the few people that have this on your Fortnite account then you should be proud. Go into a match and perform this emote proudly.

So, do you have any of the rarest emotes in Fortnite? Let us know which ones you have in the comment section.