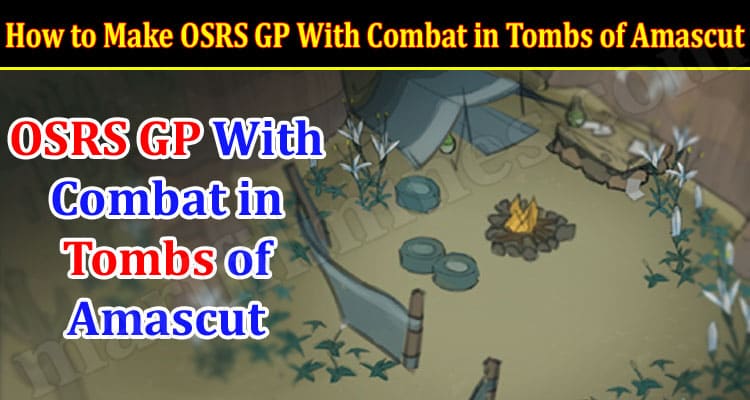 OSRS GP With Combat in Tombs: The wait for the most anticipated PvM update is almost over for OSRS players. Tombs of Amascut is coming close to its unofficial release date: mid-August. This means that you will soon be able to add another activity to your methods of earning OSRS GP and your list of favorite group activities to do in RuneScape. Considering how fast Nex became one of the most profitable bosses and that Tombs of Amascut will feature the BIS magic weapon, you’ll be sure to gain a lot of OSRS gold from it.

Possibly the Best BiS Weapon is In the Works

The future best in slot (BIS) magic weapon is a magic staff called the Shadow of Tumeken. It will significantly increase your magic accuracy, but you will only be able to try it out in PvP in minigames such as Soul wars or Castle Wars, like all other charged staves.

We currently have no estimates on how much OSRS GP this weapon will sell. Still, given its rarity and power, we can safely assume it will be one of the priciest weapons and might even become one of the few OSRS items that trade at over a billion OSRS gold. The lore behind it is also interesting—Tumeken used the powers of another great weapon to create it so that he could protect his land against the Ruinous Powers. The weapon is so great that it is powered by the sun and has a proportional shadow. In Jagex’s words: “with that brightest light comes the darkest shadows.”

What Jagex is Working On

The dev team is now working on balancing and polishing the raid so that you’ll have a fantastic time while experiencing its challenges. But none of us like to be challenged by game bugs, so even though we’re in the desert with our Keris weapons or their upgrades, we need Jagex to handle most if not all of the bug fixes before the release.

Another thing that Jagex is doing is teasing us with a sneak peek of the bosses that you can encounter in Raids 3. And speaking of bugs, one of the bosses you’ll face is a scarab along with her swarm; the room they’re in is nicknamed the bug room.

The first boss showcased in the teaser is Zebak. Zebak is a boss in the form of an enormous and hungry crocodile that could no longer be contained by the room holding him. As such, he grew so big that the walls around him collapsed to form the cavern where you’ll soon be able to face him. His cavern is dark with a green tint, while the middle looks like a sand island surrounded by ruins and green water. Moreover, the room has red vegetation and a miniature red pyramid.

Another boss that you’ll face is thirsty—thirsty for knowledge. Kephri is a boss resembling a giant scarab in her lecture theatre. Even though she has hatchlings that continuously try to bring her valuable knowledge, sadly, she cannot understand it. How frustrating must that be? You’ll be able to face her rage soon and find that out! The multi-level room will remind you of Theatre of Blood, but the wall artwork will bring you back to the desert. The same red pyramid from the crocodile cavern also appears in the bug room.

Requirements to Fill Before Doing Tombs of Amascut

Jagex only wants to share the concept and artwork to build up the suspense about the bosses’ mechanics for now. Still, even without knowing more details about the actual mechanics, there are a few things you can do to prepare for it. First and foremost, make sure you have completed the quests that give you access to Tombs of Amascut:

You might also find it helpful to have unlocked the fairy ring system since, with the last of the quests in the desert series, you’ll be able to unlock and use a new fairy ring located south of the Raids. Completing the elite desert achievement diary also sounds like a great idea since you’ll get unlimited teleports to Nardah and free carpet rides. Not only that the teleport to Nardah will bring you close to the Raids 3 location, but you’ll also be close to a rejuvenation pool that will overheal you.

Another useful item you should consider getting is the Pharaoh’s Sceptre. And unless you’re an Ironman, it might be wise to invest some OSRS gold into it since its price has already increased by over a million OSRS GP. Getting your combat stats high and putting your hands on general BIS items such as the ancestral set might also be wise.