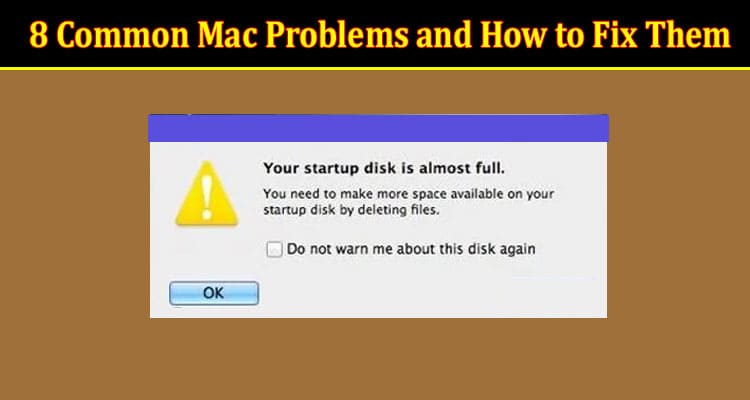 There are many reasons why so many computer users prefer Macs over Windows machines. They are appreciated for both hardware and software. Every component in a Mac is optimized for good performance with less power. These devices are also durable, so they actually save you money in the long run.

But Macs aren’t without their problems. If you’re lucky, your machine will perform like new for years to come. But if you are a heavy user, you might come across different issues. The good news is that most of them are easy to solve. We’ll list the most common problems with Mac computers, along with effective solutions you could try.

Macs can be notorious for connecting to the Internet over Wi-Fi. In some cases, the computer is connected to the network, but it doesn’t connect to any websites or email services. There are a few potential causes of this problem:

Restarting your computer is the first solution you can try. It’s a simple and effective fix to network problems.

Running network diagnostics is the next thing to try:

If that doesn’t work, you can reset the network. Here’s how to do that:

When Apple updated the keyboards for its MacBooks and MacBook Pros in 2015 and 2016, the users faced a serious issue. This was the so-called butterfly keyboard, whose mechanism caused unresponsive, stuck, and repeating keys. If you own a device with a malfunctioning butterfly keyboard, you should know that Apple has a Keyboard Service Program to cover the repairs.

But if that’s not the issue, the first thing you should try is cleaning it. Junk and dust can easily get underneath the keys, causing different problems. To clean it, you should hold the keyboard (or the MacBook) vertically at an angle of 75 degrees. Use compressed air in a can to spray under the keys, and move the device in a left-to-right direction.

If the issue persists, check if the macOS is properly updated. The next thing to try is deleting recently installed apps. Some of them might be interfering with the keyboard’s functioning.

The spinning beach ball is not usually a problem, as it indicates a busy app/system. It tends to go away as soon as the issue is resolved (by itself). This issue may be caused by multiple errors:

The first possible solution is to end the processes that cause the blockage. You can do that through the Activity Monitor. You’ll see all active apps, so you’ll need to close the ones you believe are stuck. If nothing resolves the spinning beach ball, you should consider reinstalling the macOS.

Sometimes no sound is coming out of the computer’s internal speakers, and you can’t figure out what the problem is. Broken hardware (headphones or speakers) may be the first potential issue. Other reasons include:

First, restart your computer. This is a quick solution for different issues, including speaker errors. If that doesn’t solve the issue, you can run maintenance scripts. If the problem persists, you can check out these detailed tips on how to resolve the Mac speakers not working issue.

The Mac trackpad is known for its responsiveness. It’s one of the best features that make it better than most other laptops. But even MacBooks can have failing trackpads, which are usually caused by firmware issues, hardware problems, missing drivers, or system settings mistakes.

If you weren’t able to find the issue that way, you should check if the trackpad’s firmware has been properly updated. That’s simple: just check the Applications section in Software Update for any needed updates.

If the macOS is not booting all the way and you see a black or gray screen, the issue is probably caused by a malfunctioning app that automatically loads at startup. You can resolve it in Safe Mode. If you own an Intel Mac, press the Shift key during booting, and you’ll enter Safe Mode. on an Apple silicon Mac, you should press and hold the power button and then select your startup disk. After that, you should press and hold Shift, and choose the option that sends you to Safe Mode.

Once you’re there, enter the Disk Utility to repair a corrupt file system or alter disk permissions. This solution may be overly complicated for a casual user, so you can consider taking your device to an authorized service provider.

This is another stressful issue, especially if you need your Mac for work ASAP. The first thing you should try is holding the power button until the screen goes blank, and then letting the button go and pressing it again.

You should also check the battery’s cycle count. If it’s an old device, a battery replacement may get it running again.

If that isn’t the problem, you should check if the cable and power adapter work on another Mac.

Another potential fix is resetting the SMC. Devices powered by Apple silicon chips don’t need SMC resets. On an Intel Mac, you can do that by turning off the device, and then pressing and holding the left Option key, the left Control key, and the right Shift key for 7 seconds, while pressing and holding the Power button at the same time. Restart the Mac a few seconds after releasing all keys.

Not a single piece of technology is entirely immune to problems. Macs are outstanding computers, but they are susceptible to different issues. The troubleshooting tips above will help you solve some of them, so you’ll have a functional device for years to come.