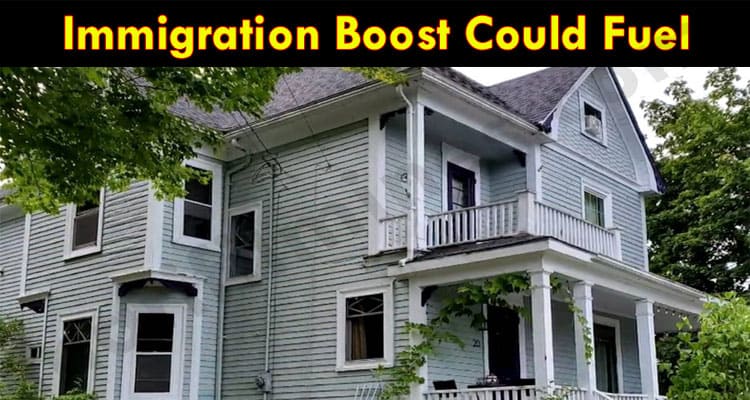 Immigration Boost Could Fuel: The Canadian property bubble refers to a considerable surge in Canadian real estate prices from 2002 to the present (with brief drops in 2008 and 2017).

Home and property prices in some Canadian cities increased by 337 percent between 2003 and 2018. By 2018, house ownership costs had risen above those seen in 1990, when Canada’s last housing bubble burst. In 2019 and 2021, Bloomberg Economics lists Canada as the second greatest housing bubble in the OECD.

The last housing bubble in Canada occurred during the early 1990s recession.  The country was dealing with low commodity prices, enormous national debt, and a deficit depreciating the Canadian dollar. The possibility of Quebec independence, and a recession in the United States, naming a few issues.

The decrease of Quebec separatists following the 1995 referendum and the commodities boom of the 2000s significantly improved personal fortunes among Canada’s middle and upper classes. Significant rural-to-urban movement and immigration to Canada at this time put downward pressure on housing prices in major cities.

Increased immigration will promote economic development and alleviate Canada’s deteriorating post-pandemic labor shortage. But newcomers can add fuel to a blazing property market that the central bank has cautioned about “a rapid rush of investors.”

In addition, the country focuses on high-skilled immigrants, who are more likely to bring money and earn enough.

Immigration Minister Sean Fraser told Reporters, “Canada needs immigrants to create employment and drive our economic recovery.” “It’s not simply that an immigrant owns one out of every three firms in Canada; newcomers are also helping to alleviate labor shortages.”

Low mortgage rates and a scarcity of housing have pushed up housing expenses. Another element, especially before the epidemic, was migration. More arrivals are anticipated now that most borders have reopened to compete for coveted homes.

Massive Increase in Housing Costs Due To Inflation

Inflation has reached its highest level in 18 years, thanks to rising housing costs. According to analysts, the government promises to reduce housing costs will take years to implement, and specific measures may boost demand.

The effect of immigration on housing costs is a “conundrum,” according to Stephen Brown, the senior Canadian economist at Capital Economics. Nonetheless, continued building and a labor shortage necessitate more immigration. Brown claims that Canada’s workforce will “flatten” if immigration is not allowed.

From federal Conservative Party Leader Erin O’Toole to Ontario NDP Leader Andrea Horwath, politicians across the political spectrum have labeled Canada’s current housing market as a “crisis.” Across political parties and levels of government, there is agreement that something has to be done, particularly in light of the “hot money” floating about in the market from investors eager for a quick profit.

Home prices have skyrocketed in some parts of Canada, pushing young first-time buyers out of the market and raising fears of a housing crisis. There is little question that the global interest rate drop, higher white-collar savings rates, and speculative activity are driving these significant price hikes. Policymakers should think about how to cut down on speculative excess.

However, if governments fail to describe the problem they seek to solve, misunderstand the core causes of that problem, and apply the same old “let’s implement a tax credit” answers, they risk doing more harm than good.

More and cheaper money and speculative money are significant elements of the tale, but it is not the entire story; it may not even be the most important story. Hot-money arguments alone cannot explain why the price of a single-detached home has climbed by more than 60% in Ontario cities from Barrie to London over the last two years, but only by 20% in Winnipeg, for example. Prices have increased by 10% in Calgary, Edmonton, Regina, and Saskatoon.

Canadian Manufacturers Call for Increased Immigration of Economists by 2030

According to official figures, job openings in Canada have quadrupled so far this year. The Canadian Manufacturers and Exporters Association appeal to the government to boost the economic category of immigrants by 2030 due to a workforce shortage in industries.

The benchmark property price has climbed by 77.2 % since Trudeau took government in November 2015. His administration intends to offer a housing package to parliament, including a C$4 billion ($3.2 billion) fund to speed up housing plans in the country’s main cities.

According to Statistics Canada, immigrants are more likely to buy in significant urban areas, such as greater Toronto and Vancouver, where property prices have risen beyond C$1.12 million. According to realtor statistics, Canada’s average property costs C$762,500 ($600,299). In comparison, the average home in the United States is valued at $312,728, according to Zillow.

The rate of price rises is projected to slow down next year, while according to experts polled by Reuters, housing prices in Canada would grow 5.0% by 2022, which will be less attainable. The purpose of the state fund is to construct 100,000 new “middle-class” homes by the year 2024-2025, and the money will go to communities that can demonstrate they can speed up the process.

According to Statistics Canada, immigrants are more likely to buy in significant urban areas, such as condos in Mississauga, Greater Toronto, and Vancouver, where property prices have risen beyond C$1.12 million. According to realtor statistics, Canada’s average property costs C$762,500 ($600,299). According to Zillow, the typical property in the US is valued at $312,728.

Rapid price increases are expected to decrease this year, while Reuters surveyed economists predict that home prices in Canada would rise 5% in 2022, making those  less accessible.

In specific Canadian marketplaces, the combination of hot money and supply constraints produces quick price increases, while in others, it is not. On the other hand, governments have mainly concentrated on the demand side of the ledger, with tax-free RRSP withdrawals, first-time homebuyer tax incentives, and a First Home Savings Account, for example. That will not address the underlying housing difficulties in southern Ontario before the epidemic.

At least two prongs are required in every comprehensive housing policy proposal. “Build, baby, build,” says the first. In areas of Canada where housing prices are out of control, all three levels of government must remove impediments.

If necessary, provide incentives to encourage the construction of more family-friendly and climate-friendly bungalows in Mississauga. Of course, it’s easier said than done. It will also need a coordinated effort from the entire administration. However, until that effort is made, the situation will only worsen.

Another view is what we’ll refer to as “move, young person, move.” The epidemic has taught us a lot of valuable things. One of the most important is how white-collar Canadians have weakened the connection between our homes and workplaces.

Although moving expenditures are tax-deductible, much more can be done to make the incredibly high, one-time sunk costs of relocating from expensive to more affordable areas more, um, cheap. Instead of enabling RRSP withdrawals or providing tax-free savings vehicles for house purchases, governments should provide mechanisms to cover the expenses of migrating to locations where housing is plentiful.

The housing market problems in Canada precede the epidemic and are more regional than national. Many parts of Canada, notably southern Ontario and the lower mainland of British Columbia, cannot keep up with population growth by developing enough family-sized houses.

For example, Ontario’s population increased by about 950,000 people in the last five years, a 330,000 rise over the previous five years, thanks to increased immigration objectives and an infusion of international students who frequently stay in Canada after graduation.

Despite the significant population expansion, housing unit completions increased by just 40,000 during the two five-year periods, with the great bulk of the rise occurring in one- and two-bedroom condominiums. The number of units finished in Toronto, a popular destination for foreign talent, remained virtually unchanged.

The current goal of the government fund is to construct 100,000 new homes for the “middle-class” by 2024-25, and the funds will be distributed to local communities that can demonstrate they can speed up the process. Economists feel that while this policy will be good, other property program policies will economically boost demand.

As per Jodi Gilmour, a property manager, the Peel area – part of the Greater Toronto Area – admitted around 45,000 immigrants per year before the epidemic, but that ceased during the pandemic due to border restrictions.

Anything else is merely window decoration; good policy must address core issues. Our housing crisis is a regional issue that can only be handled by creating more homes in areas where they’re scarce and assisting people in getting to locations where they aren’t.

“Currently, we’re seeing a rush of buyers trying to beat the two elements that will have an impact on their position in 2022,” she added, referring to increasing loan rates and competition from immigration.