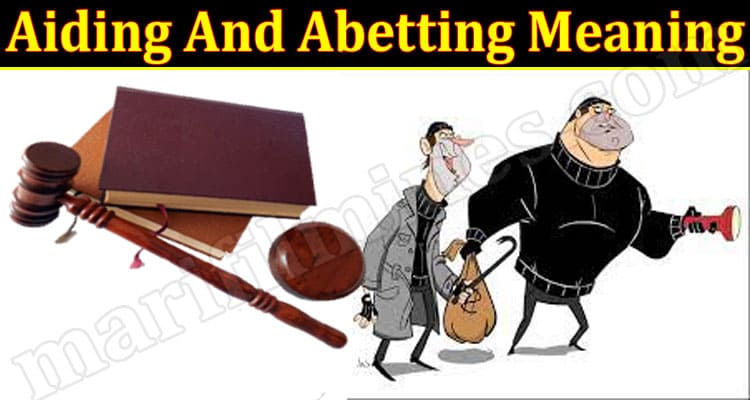 Aiding and Abetting Meaning: It is often believed that the United States holds anyone liable for a crime for two reasons. One, if they commit a crime, two – they aid or abet in the criminal activity regardless if the criminal himself succeeded in the crime or not. However, legal liability cannot be pressed until it is recognized by the rule of law with the help of reasonable evidence. Here, it is essential to understand aiding and abetting meaning, to hold someone liable for a crime that he did not actually commit.

Legal liability for a crime

Accomplice liability is referred to as the liability of an individual who assists someone in the commission of a crime without participating in the actual criminal activity. Such a person is called an accomplice.

For instance, the person who tells a bank officer to hand him all the money would be held liable for armed robbery. But the person who assisted him in arranging arms, the person who monitored the door, the person who brought the car for a safe escape, and the one who provided the house after the crime will all be considered accomplices.

The individuals who encouraged and aided the person to commit the bank robbery will be charged under accomplice no matter if they did not commit the crime in question.

The purpose of defining accomplice liability is that the accomplice faces the same level of punishment and would be considered guilty as the actual person who executed the crime. This means that no matter how many accomplices were involved in the commission of a crime, they all will come under the same aiding and abetting law and will be pressed with the same charges including jail time.

The major consideration in determining the charges against accomplices is whether the accomplices are intentionally provoked or just assisted in the commission of the crime or in other words – failed to hold back themselves from aiding the committer.

The definition of being charged for aiding and abetting may differ across states. But the prosecutor will need to prove the following four elements in order to convict an accomplice of a criminal charge;

Here are some examples that explain how an individual can be called an accomplice or aider in criminal activity;

The major difference between complicity and conspiracy

The state rules for a criminal charge vary according to the crime and associated damages. But essentially, if you actively participate in criminal activity, you can also be charged for being a part of the conspiracy.

When an individual agrees with others to commit a crime in the future, he will be referred to as a conspirator. While an accomplice aids the individuals in a way that eases the commission of a crime for an individual. In addition, unlike the accomplice, the conspirator will be charged guilty even if the crime was not successfully completed.

For example, a group of friends plans to rob a jewelry shop and perform overt actions in order to complete their plan (like purchasing masks, guns, and related stuff, etc.). On enquiry and incarcerated, they would be charged with the conspiracy crime even if the robbery never took place.

On the other hand, if the robbery gets completed, they will be convicted of both conspiracy and robbery crimes. (following with the accomplice’s rules legislated on the state).

What to do if you are accused of Accomplice or conspiracy charges?

Being accused of a criminal activity that you haven’t performed can be serious sometimes. Whether you are charged as an individual who committed the actual crime, conspired, or got accomplice charges, it is always suggested to take legal advice prior to making a decision regarding your case.

Hire an experienced criminal law attorney from your local clerk’s office and find your options to save your rights.