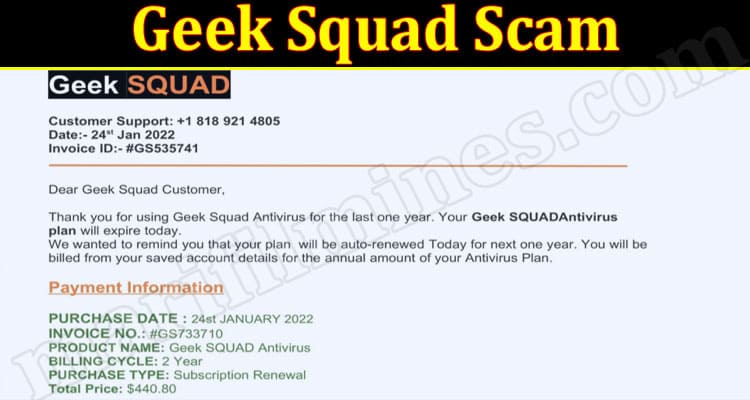 Read exclusive details that are unavailable elsewhere about the Geek Squad Scam. Also, learn how a VISHING is plotted.

Geek Squad is an antivirus and software solution provider. It also offers repair services for all types of computer devices. As you may be aware that for accessing premium features of antivirus software or for AMC for repairs, the customer needs to pay a yearly subscription fee.

Scammers misused the Geek Squad brand to target innocent people. People received an email from ‘Payment_Details’ irrespective of whether they were using the services of Geek Squad. The email informed that an amount ($280, $399.99, and $987) was auto charged to the customer’s bank account as the customer had selected for auto-renewal of their subscription.

The email mentioned that their Geek Squad services were renewed for the next two or three years. The email referenced the invoice number, product name and subject line with a plan number. However, the product name did not clarify if it was for antivirus services or AMC. Most importantly, the email included a phone number if the customer wants to dispute the charges.

It was the ultimate trap! The scammers wanted people to call them to dispute the charges. Unfortunately, many innocent people fell into the trap and called the number. The initiator of Geek Squad Scam then requested to remotely check their computer for any Geek Squad products installed. The scammer then acted as if they had charged the person in error.

As a next step, the scammer initiated a refund request in front of the customer. But, INTENTIONALLY acted to process a refund for a HIGHER AMOUNT! For example, for a charge of $399.99 informed in the email, the scammer acted to refund $4000.00 in error.

Next, the scammer requested the customers to repay the difference in the amount via BestBuy gift coupons/codes, which can be purchased online and informed over the phone. In Geek Squad Security Scam, people were made to believe that the amount in the refund request cannot be modified, and BestBuy coupons are generally accepted for repayment as Geek Squad is related to BestBuy.

People believed and bought BestBuy gift coupons and informed the coupon codes to the scammers. Gift coupons are meant to be gifted, so transfer history is not maintained! The scammer will be untraceable as the gift coupon transaction does not appear on the bank account, PayPal, E-wallet or plastic cards! Hence, no question of reporting fraud to financial institutions!

Did you know refunds on gift coupons cannot be requested? Please comment about this article on Geek Squad Scam.