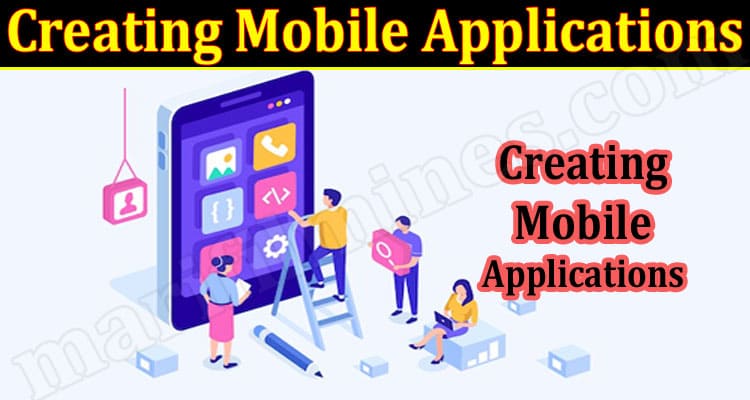 Creating Mobile Applications: Smartphone apps have been very popular for several years now. Owners of modern gadgets download completely different applications to their devices, with the help of which they can not only communicate or diversify their leisure time, but also work or study.

Creating applications for mobile devices is a rather complex and lengthy process that requires certain skills and abilities from developers. Therefore, only specialists who can competently analyze the market and launch web projects at a professional level should be trusted with the development.

What is Mobile Application Development?

The process of developing mobile applications is a set of works on writing code to run programs that will work on mobile platforms. These programs can be built into the device immediately or independently installed by the owner of the gadget. Also, today it has become very popular cross platform mobile app development. Many companies use this development method as the main. It’s simple, safe and beautiful. You can contact us for more detailed advice.

The focus of mobile application development is on creating an attractive user interface, which is the key element between the software and the user. Also, developers should consider such important parameters as screen sizes, the set of necessary functions and the reduction in the number of keystrokes in the process of users working with the application.

We can safely say that the development of a mobile application is not only writing code by programmers. This is a creative process that consists of many diverse tasks.

What does a mobile app developer need to know?

The main task of the developer is to launch convenient and multifunctional software applications that will work smoothly and have functionality available to users. To create mobile applications, a specialist needs a large number of special skills. He draws up the terms of reference, builds the project architecture, writes the code, discusses all the details with the customer, works with designers and other specialists involved in the work on the order.

In the process of developing applications for iOS, programmers use the new Swift or Objective-C languages. It is the programmers who create projects for iOS that receive the most income.

The popular Java programming language is used to develop Android applications. It is chosen for its high reliability. It is believed that this particular language is optimal for launching projects on the Android platform.

For whatever platform the development is carried out, the programmer will need such professional technical skills as:

A key feature of the development of mobile applications to order is the orientation to the screen of each specific device. Modern gadgets can have screens of different shapes and sizes. That is why it is so important to rely solely on real user experience during the launch of a project.

Another feature in the development of mobile applications is a wide range of mobile devices for which projects are launched. Programmers must take into account all the features of the devices on which the application will run.

As in the process of launching any modern web project, there are a number of mandatory steps in the development plan for mobile applications, arranged in a certain sequence. It should be noted that when selecting the stages for launching applications, it is necessary to focus on the needs of the user and the interface.

There are such stages of mobile application development as:

At the very beginning of the work with the project, design layouts are created. To do this, the design specialist creates several windows of the program for the approval of the manager and the customer. The task of this stage of creating a mobile application is to determine and approve the main design concept of the project. After all, it is at this step that you can quickly make any changes. After the final approval of the concept, the designer proceeds to its full implementation.

The specialist proceeds to the development of a mobile application, having an approved technical task and a ready-made design project. The programmer writes the code and introduces into it everything that was approved at the initial stage of agreement with the customer. It is recommended to develop mobile applications on those gadgets on which they are planned to be further used. So you can test the application even at the stages of creation.

During the development of mobile applications, the testing process is mandatory. The main task of specialists is to ensure that the program works perfectly on release in order to guarantee inexpensive further promotion. And this can be achieved only with the help of constant testing, for which you do not need to spare resources.

During testing, you can not only find and eliminate errors in the program, but also evaluate the convenience and ease of use of the application. These factors will become key for users.

Testing mobile apps on iOS is easier than on Android. This is due to the peculiarities of creating software for Apple devices. The total number of mobile devices on Android as a percentage is approximately 80%. At the same time, a feature of creating programs for devices on this platform will be their great variety. Android devices operate from different manufacturers with different configurations.

After the completion of the mobile application development process and its launch, another important stage begins – support. For its high-quality implementation, it is important to build communication with users in order to receive feedback from them about the application and its functionality. It is important to promptly respond to negative reviews and take into account all the wishes of users in the process of developing a mobile application. Use their feedback and comments to improve the functionality of the application.

The specifics of creating mobile applications is that you can never know for sure how popular the program will be. It is important to bear in mind that many factors will affect the demand for an application among users. Trying to copy successful products in this case is useless. Only a competent analysis of current trends and user preferences will help to achieve a good result.

Current trends in the mobile device market indicate that most of the equipment being sold operates on the Android platform. The reason is the affordability of devices, which is attractive for both developers and buyers. However, Apple mobile phone apps are also popular and demanded by users. Although the volumes of supplied and sold devices are much smaller.

It is almost impossible to determine the final cost of creating a mobile application right away. You can only rely on approximate data collected on the basis of work with previous projects.

To determine the exact cost of developing a mobile application, you must first agree on all the features and functions of the future project. To reduce the cost of launching a mob. applications, it is recommended to choose one main operating system, taking into account the specifics of which the work will be carried out. After comparing these data, you can choose the most suitable option.

If you want to get a high-quality program that will function efficiently and smoothly, it is best to order mobile application development from professional agencies. Web studios employ entire teams of specialists who can launch a web project of any type and level of complexity in the shortest possible time.