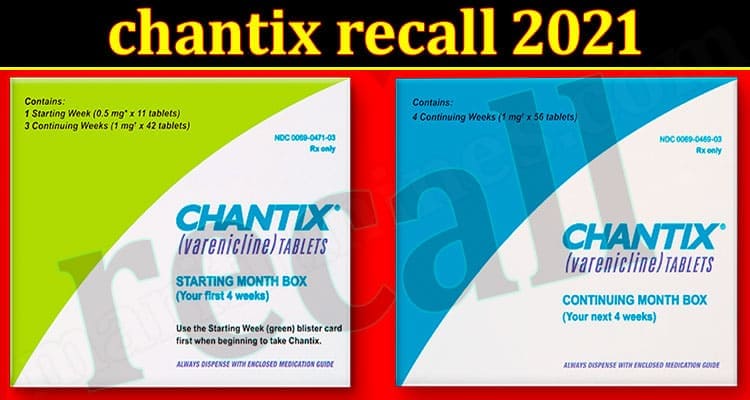 To get information on Chantix recall 2021 removed from the market due to the presence of carcinogenic elements, read the full article below.

Pfizer decision to recall four more lots of Chantix from the United States and Puerto Rico market has caused a shortage of this anti-smoking drug in the country. Chantix recall 2021 is done after the company found nitrosamine level to be beyond FDA permissible limit. This recall is not for retailers and only covers the manufacturing and wholesale dealers of Pfizer.

Though FDA has requested for retailers recall too, still it has not passed any orders, and according to the pharma giant, this is a voluntary recall.

It is a nicotine-free prescription-based medicine used mainly by chain smokers to reduce or quit smoking. The high nitrosamine level in the pill has led to chantix recall 2021, as this can raise the risk of cancer if taken for a more extended period.

The active ingredient of this medicine is varenicline which is available as .5mg and 1 mg variant for controlling smoking habits. Smokers take this medicine in consultation with a medical expert. As per standard practice, it is taken for 12 weeks initially, and if it works additional 12 weeks is recommended for complete abstinence.

Last Friday, Pfizer recalled four additional batches of Chantix, taking the entire batch recalled till now to sixteen. Though they have not received any report of side effects on people taking this medication, this recalling is done purely on a precautionary note.

The pharma giant has asked people on this medication to consult their medical practitioner if they took the recalled lot. Nitrosamine is a chemical found in many medicines within the permissible limit, but it was more than FDA guidelines in the recalled lot.

According to the FDA, nitrosamine is found in water, meat, and vegetables; it is harmful if taken above the prescribed limit.

After Pfizer started pulling out its anti-smoking pill in the United States, there is fear of shortage in the market; its last pull of four batches on Friday has pressed the panic button for drug controllers. As there are not many substitutes for this medicine in America, drug controllers are trying to stop the shortage.

Some steps taken by FDA to stop the shortage in the retail market are listed below:

Chantix recall 2021 is not first on the list of pills recall; some time back, ranitidine and losartan were pulled off the market due to the higher presence of nitrosamines. It is in people’s interest using this medicine that Pfizer brings improved pills in the market at the earliest.

People using this medicine can share their experiences in the comment section for the benefit of other readers and give their opinion about the post below. To know more about the Chantix story, read it here.

One thought on “chantix recall 2021 {Aug} Know All About it In Detail!”