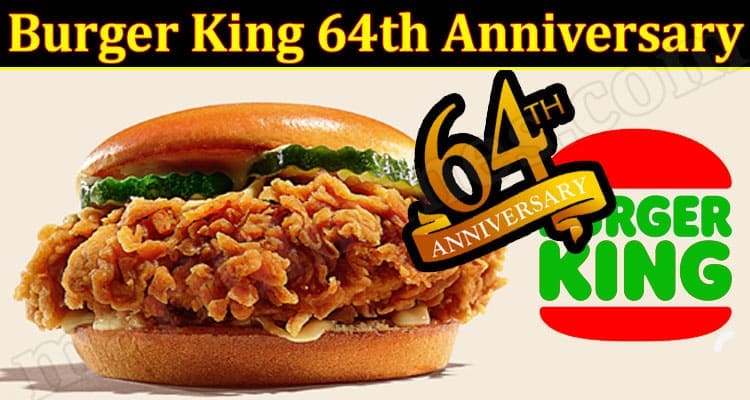 The guide shares details about the Burger King 64th Anniversary deal for the consumers who want to buy Whopper at 37 cents.

Burger King, the multinational chain of hamburger and fast-food restaurants, is planning to take down the cost of the Whopper back to its original price tag of 1957 and will offer the signature burger for 37 cents this weekend.

The exciting deal is grabbing the attention of all burger lovers across the United States. The deal is to tribute the signature burger’s 64th birthday and the membership program called Burger King Royal Perks.

The Burger King 64th Anniversary deal will be available for the weekend, i.e., 3rd and 4th December 2021. So, enjoy the deal at your nearest Burger King joint.

What is the 64th Anniversary Deal All About?

The 64th Anniversary Deal is the throwback deal by Burger King to honor the price tag of the Whopper Sandwich when it was first launched back in 1957 at the first joint in Florida, United States.

With the 64th Anniversary deal, the fast-food restaurant focuses on taking the consumers back to 1957 to honor the cost of the signature Whopper sandwich. The restaurant celebrates the Burger King 64th Anniversary of the Whopper this weekend and only offers the sandwich at 37 cents. It is the price it cost when it was first launched back in 1957.

3rd and 4th December are when the restaurant will be offering the deal, and the participating fast food joints will offer the deal via the website and mobile application.

How to Participate in the Deal?

The Royal Perk is the reward program launched earlier in 2021. Under the loyalty program, members earn points for each order, and it can be redeemed later for free burgers and other meals. For each $1 spent in the restaurant, members of the reward program earn ten crowns.

Customers interested in the Burger King Anniversary deal need to sign-up for the Royal Perk Program on the mobile application or Burger King’s website. They become eligible to buy the signature burger under the anniversary deal as they sign-up.

What are the Reactions of People for Burger King 64th Anniversary?

After reviewing online, we found that people are happy knowing about the anniversary deal from Burger King.

People are saying that Whopper, which cost them a whopping $10, will be available at just 37 cents. So, they are eagerly waiting for the deal. There are many comments from the customers that are available online.

Burger King is looking forward to giving its loyal customers the same experience they once had when Whopper was first launched in 1957. The restaurant is celebrating the burger’s 64th birthday. Hence, to honor the original price of the burger, they decided to launch the Burger King 64th Anniversary deal for the Royal Perk members. Interested consumers must sign-up for the Royal Perk Program to enjoy the deal.