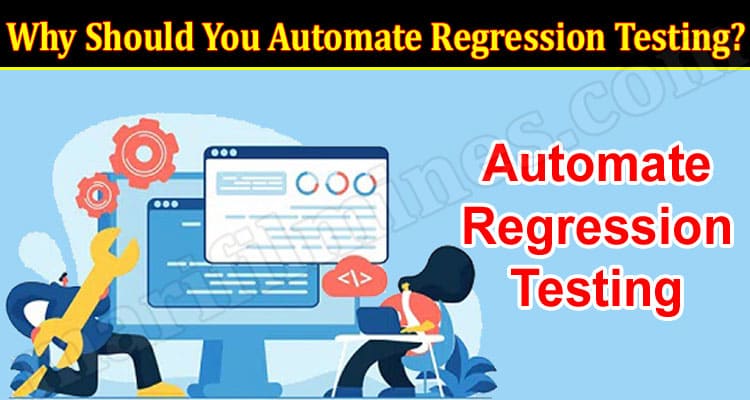 Every company that is producing a product should conduct tests. Many small and mid-sized businesses overlook testing, although it is critical to provide quality products. Having tests in place is crucial, but knowing how to execute them is also necessary.

Test automation improves overall software development efficiency and enables the creation of powerful tools. Manual testing is preferred by some companies but is not ideal. When you’ve got your tests in place, the next obvious step is to automate the process.

This article delves into some of the advantages of test automation—let’s get started!

What is regression testing?

Regression testing automation is more than a full or partial selection of previously run test cases that are re-run to verify that features are still in place.

This testing ensures that any new code changes won’t negatively impact the functionality of already-existing systems. Once the most recent code updates are implemented, it ensures that the older code still functions.

What is Regression Testing Automation?

Regression testing automation is software testing that employs computer-based tools and procedures to evaluate software after it has been updated with the latest code or attributes.

Preliminary studies on software testing criteria, test strategy, and modifications to the product and its functionality are frequent while implementing automating regression testing.

Many workflows are covered by automated regression testing, such as verifying procedures to confirm that the program was compiled successfully after the update, testing the workflow, and discovering functional defects. All reliable solutions are also put through their paces to see if any problems arise during the upgrade.

Automating regression test cases must be run numerous times to find flaws in the build. Repeating these processes guarantees that each test case has been thoroughly validated and everything works correctly.

Regression testing automation: Why is it required?

Regression testing is used in a variety of situations.

Why regression testing: Reasons to automate

Regression testing is required for every project because it occurs regularly after each sprint or development phase. It implies that the QA team must repeatedly examine the same functionality immediately after testing new features.

Regression testing automation is therefore appropriate in the following scenarios:

These are but a few instances where automation makes sense. The notion that anything that can be automated should be is another thing you could hear. Even though it’s not entirely accurate, regression testing frequently causes the release to be delayed when done manually.

Why is automated testing crucial?

Even though every software development team tests its output, deployed software is always flawed. Even with the most remarkable manual testing techniques, they always sneak in and frequently recur despite test engineers’ best efforts to catch them before the product is launched. The best method to improve the efficacy, productivity, and coverage of your software testing is through test automation tools.

A person conducting manual software testing before a computer would methodically browse through application screens, experiment with different usage and input combinations, compare the outcomes to the expected behavior, and note any findings. During development cycles, manual tests are frequently run again to account for source code modifications and other scenarios like different hardware and operating system configurations.

An automated testing tool can replay previously recorded and predetermined activities, compare the outcomes to the expected behavior, and inform a test engineer of the success or failure of these manual tests. Automated tests can be quickly extended to handle things that manual testing cannot. Once they have been created, they can also be easily repeated. As a result, intelligent managers have discovered that automated software testing is a crucial element of fruitful development initiatives.

Although automated software testing is frequently believed to be too expensive or challenging for smaller businesses to undertake, it has long been recognized as essential for large software development firms.

Automating regression testing should be updated frequently to ensure the test plan is current with the latest version of the application.

When software is constantly updated, it’s vital to re-run all successful test cases to guarantee that the program continues to work effectively. Because the program functionality may have changed due to the upgrades, it is critical to re-run tests to ensure no new issues have arisen.

The organization needs to categorize duties to be carried out efficiently. Even if a project fails, knowing which category it belongs to makes locating the root of the problem much more accessible.

Fortunately, regression testing automation saves time and has numerous benefits. These are:

One of the most problematic aspects of regression testing is that as your application expands, you’ll have to run more tests on more complex code. It doesn’t take long to get to the point where you spend most of your time and resources double-checking existing features, or regression tests are de-prioritized in favor of others.

Automated regression testing allows you to scale your testing efforts and test as frequently as needed to ensure high-quality software releases.

Regression testing is often performed after software builds as the last step before a release for teams using a waterfall strategy rather than an agile one. However, with automation, it is possible to test iteratively, resulting in quick feedback loops and a reduction in overall testing time while boosting quality.

You can determine why tests fail with an automated tool that provides visual recordings and logs, which often speeds up feedback loops and failure fixing.

New tests are required as new features are added to a product, which leads to the regression suite growing over time. It will eventually reach a point where manually managing regression test cases is no longer practicable.

As a result, choosing an automation solution that allows you to preserve a clear perspective of your testing suite while also allowing you to alter and manage it without having to rewrite or update code is critical. This is achievable using a no-code automation solution, which reduces maintenance costs.

On a broad level, the most significant advantage of automated regression testing, and automated testing in general, is that it saves time and resources.

You can use automation to thoroughly test specific areas of the software, freeing up your time to focus on other sorts of tests and solutions, as well as a manual study of more rare scenarios that demand extra attention. Regression testing automation can improve your software product and, as a result, provide a better and substantially less buggy experience for your customers.

More time can be saved on implementing and maintaining automated flows by using a test automation solution that doesn’t require coding, removing dependencies on developers, and allowing QA teams to flow around bottlenecks.

Regression testing automation can run 24 hours a day, seven days a week. With scheduling, you can run your tests at night, so no one has to wait for results or schedule them to run at particular intervals, such as daily or weekly, to ensure no issues are missed. While regression testing automation runs in the background, testers can work on more value-generating tasks.

Continuous regression testing alerts testers to bugs before they reach end-users. As previously said, discovering and repairing errors is made easier and faster with visual records and logs.

Even if you meet all of the requirements for automation, several factors may make you reconsider. Yes, automation has several drawbacks, most connected to test prioritization and maintenance.

QA engineers must cover new features’ behavior during final tests as they arrive. Some of these additional features will unavoidably become core functionalities. With time, the number of test cases might expand tremendously, and instead of reusable and laconic tests, you risk having automated scenarios that still take a long time to run and support too many scripts.

The requirement for changes in a test suite is self-evident. Selecting cases and scenarios for automation, eliminating ineffective scripts, and changing tests appear difficult. If automation takes too long, it loses its efficiency.

In addition, perform tests simultaneously on multiple platforms. This saves much money, time, and resources, allowing software changes to be released on time. And, because they’ve been tested on various platforms, they’ll also work on consumer devices.