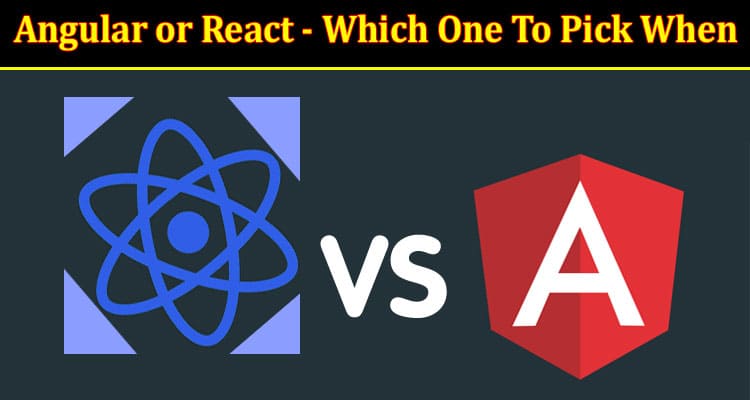 JavaScript framework is behind almost every modern web or mobile app. The Facebook profile that you use to connect with people or the YouTube app that keeps you entertained came into being with the help of JavaScript frameworks only.

As per research, out of 1.6 billion websites in the world, nearly 1.5 billion are developed using JavaScript. Clearly, app or web development means using JavaScript framework only.

Out of all the existing JavaScript frameworks, React and Angular are quite the competitors. What do they both mean? How do these two different from each other? Which one is best in which scenarios?

These are a few mysteries that we will solve in this post.

React or Angular – A Quick Comparison

Anyone involved in web and app development must be aware of these two terms already as they both are very famous in the angularjs developer community. We have already covered the meaning, strengths, and weaknesses of React vs Angular JavaScript frameworks extensively. So, we’re going to waste your time. Today, let’s focus on the differences only.

We’re going to assess the offerings of these two frameworks on aspects like:

So let’s get started.

Understanding the offerings of both at data binding is important as it is the data binding process that decides how the elements and UI are connecting with data.

When it comes to data binding, both React and Angular have different offerings. Angular uses bi-directional or two-way data binding. This type of data-binding refers to having a continual connection with components and views. End–users in this data binding type can exchange data in both directions.

The simple explanation of this could be altering any UI elements means significant changes in the state of the respective model or vice versa.

React, on the other hand, uses one-way or uni-directly data binding. It refers to using only a single way for data transferring.

But, unlike Angular, any alterations in UI components of React will have no impact on the model’s actual state. It remains unaffected by the changes happening.

Now, let’s understand what difference this could make. Even though the ability to have a two-way data flow is great, be ready to deal with the complexity of the process. You’re going to have a tough time handling both the UI components and model state.

On the contrary, things are easy with the one-way binding of React. Even if development has to take place on a large scale, it won’t be too complex. Debugging is easy.

Verdict – If you’re a rookie developer and don’t want to deal with complexities, go with React. Angular demands notable expertise to make everything fall into the right place. But, the two-way binding of Angular is not a bad thing. As it keeps the developer’s involvement as less as possible, it’s the right choice to make for automated development.

DOM is crucial as it permits scripts/programs to have seamless access to the content, style, and structure of the document and make systematic and dynamic changes.

Verdict – Go with React when you seek an inexpensive and effortless web or app development as the Virtual DOM of Reach will make things sorted out a lot. But, if you’re working on a project that involves too much DOM manipulation, go with Angular.

Verdict – The kind of extensive support React is receiving is because of the fact that it’s much older and has been used by more developers. So, you can’t use it to conclude. You never know; Angular could become more popular than React by the time it becomes as old as React.

Verdict – Angular is a bit heavy to process. Blame the two-way binding that makes too many elements come together. So, you’re likely to experience certain performance lagging.

Angular is an HTML-based resource, while React uses JSX. The ability to bring markups and logic together certainly helps JSX gain an edge over HTML. With JSX, code generation, debugging, and compilation is easy.

Verdict – React is based on highly interactive and productive language. Even though Angular uses a very common programming language, it’s not a great bet to make if you’re looking for straightforward development.

Verdict – We have to admit that you can use React without any compatibility issues as it works well with all of its peers.

From the above text, it’s very much clear that React and Angular have different properties, behavior, and processing. These differences make them ideal for distinct development objectives. Try React when you need a single-page application, native mobile apps, and dynamic applications.

Angular is the best bet to make when you’re developing a prototype, hybrid & cross-platform apps, and enterprise software.

The Final Verdict: Choose wisely as Your Project Demands

The offerings and benefits of both React and Angular are copious. As a user, you must focus on what your requirements are and which resource is addressing most of your development objectives. This is going to be a lot of groundwork. Hope, now you understand why you should use ReactJS or Angular for your project. So, it’s better to hire a Reactjs development company like Bacancy Technologies. With one-to-one consultation, it will help you find out which development resource is appropriate for you and even help you achieve flawless development.

Chandresh Patel – The founder, Agile coach and CEO of Bacancy Technology. He has entrepreneurial expertise, skills, and spirits. Also, chandresh has experience in Agile Software Development Services, which help organizations to achieve their goals. Chandresh runs the organization in an innovative and collaborative way to meet the expectations of clients by offering quality results.