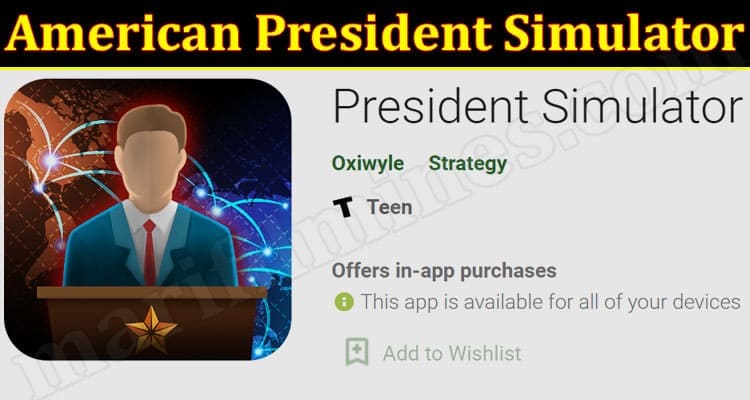 It has always been exciting and thrilling in the gaming circles to role-play famous personalities, emulate them and try to live the character in one’s way. The excitement reaches the zenith for the political gaming exercises.

These games have become popular as political agendas in real life started engaging the young population in the United States. American President Simulator games are available in various forms. We will discuss how these games function and what in them makes them super-exciting for the young generation.

The President simulation games put the players in the role of the President. The situations and gameplays normally include the cold war scenarios or the recent fierce Trump-Biden election campaigns. Usually, a campaign has to be run by the candidates through collected funds, setting a plan and adhering to the party’s values.

After being elected, users set a budget, send aid to foreign countries, establish diplomatic relations, and fight wars. Re-election is an important segment of majorly every American President Simulator game. Shadow President, the most famous and the oldest president simulation game, also provides for impeachment, conditions the decisions made by the user as President, and also the terrorist groups’ shenanigans.

The main component is to assimilate the real-world problems and anomalies. At times, it is said that the game does not allow users to be active, and they mostly have to work with less discretion than it generally appears. This passivity, however, is also a component of the President’s life who has to plan his actions according to various implied conditions.

”I Am Your President” is the newest addition to the President simulation games; The President studio developed it. Only the prologue of the game is released yet with the full release of the game to follow. In the game, you can decide the world’s fate and run the country any way you like. Thus, it eliminates any passivity of sorts from the game. It is expected to take care of the poorest, or it’s a choice to work for capitalists. Agendas such as climate and guns are on the table. Endorse them or stand against them. American President Simulator games include one President Simulator Game 1.1, where you can win the election, become a President and run America.

The challenge is- Can you make America great again? Powers such as vetoing bills, responding to disasters, unlocking new political advisors, selecting outfits, etc., are equipped in the game. ”President Simulator is one such game where you can be a president of any country.

The simulation of the President is always a delight for role-playing lovers. The games are most popular in America. In games such as President Simulator, the most chosen country is the United States. American President Simulator games became more popular with the improvement of AI as decision making became efficient and more functions were indulged. To know more see, Play President Simulation game