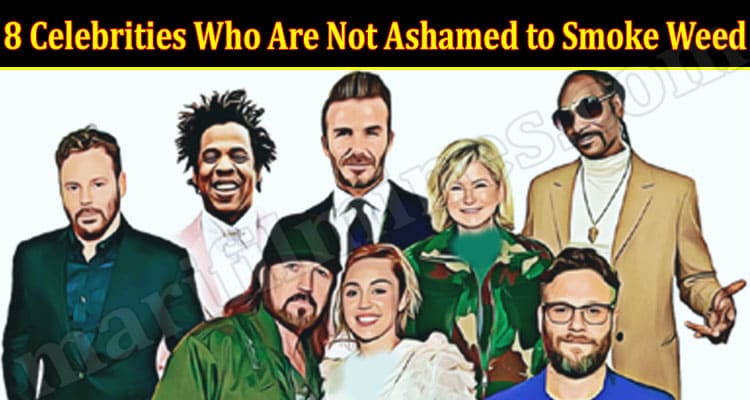 Celebrities smoking weed don’t need to worry about getting their hands on copious amounts of buds. For the rest of us, our best bet is probably to grow our own. If you want a superstar-level stash, the performance of extreme yielding seeds is Oscar-worthy.

What stoner superstars are you aware of? As cannabis loses its “demon-weed” image, more and more marijuana-loving celebrities pop up every year.

Stoned celebrities aren’t a new development, with stars as far back as the 1920s indulging in the sweet leaf. In later decades they tended to keep their interests private to protect their careers.

Now that cannabis is more mainstream than ever, the number of celebrities smoking weed is growing. Read on for a list of stars not afraid to fly the stoner flag with pride.

Let’s jump straight in and learn about eight celebrities who are happy to blaze up without reservation:

This enterprising young rapper has made a tidy profit from his stoner image. With an album titled Rolling Papers, Wiz has never been shy about his love for cannabis. Speaking to Vice, he said that smoking helps free his mind and allows him to think more creatively.

Weed is a central theme in his music, and he’s gone on to release his own strain called Khalifa Kush. Wiz has also combined his love of games and weed to develop a hugely popular cannabis farming phone game.

Snoop is one of the most well-known weed-smoking celebrities. The Doggfather has been open and vocal in his support of cannabis since legalization seemed like an impossible dream.

On top of his music empire, Snoop is the proud owner of a line of cannabis products called Leafs by Snoop. These include oils, edibles, and bud. He also owns Merry Jane, a cannabis-oriented media company with several shows dedicated to pot.

Woody is another weed-smoking celebrity who’s been very outspoken in his support for legalization. Harrelson’s serious stoner credentials and activism have earned him membership in the National Organization for Reform of Marijuana Laws.

There was a time when Woody joined the ranks of celebrities who quit smoking weed. Ultimately, another weed-smoking celebrity got Woody back on Team Green. Harrelson stopped smoking for almost two years. Then, he ran into the next celeb on our list.

This country legend is an OG stoner, and we’re sure Woody Harrelson isn’t the only celeb he’s shared a toke with. With over fifty years of experience, it’s no surprise that he’s the only celebrity known for smoking weed to outsmoke Snoop Dogg.

When asked about how important cannabis was to him, Nelson said he wouldn’t be alive without it. He went on to say that if he had continued drinking heavily, he would have died long ago.

Netflix’s 2017 Gaga documentary showed us a new side to the “Born This Way” star. Lady Gaga revealed that cannabis played an important role in her private and professional life.

The weed-smoking celebrity singer explained that she has fibromyalgia and medicates using cannabis to treat her chronic pain. She also tokes up to get creative.

In 2011, Gaga told 60 Minutes that she smokes a lot of pot when writing music. She told the interviewer she wouldn’t sugarcoat the truth about her cannabis use.

This former Disney star has done a lot to shed her squeaky-clean image, including coming clean about her cannabis use. This weed-smoking celebrity opened up about her long history of smoking on the Joe Rogan podcast in 2020.

Speaking about her time as a teen TV star, she recalled asking herself how much weed she could smoke and still appear on the Disney channel. Her answer, it turns out, was far more than she thought.

Another celebrity known for smoking weed, Rogen has made a name for himself playing a weed-loving stoner on the big screen in multiple movies. While he’s been focusing more on directing recently, it hasn’t stopped his love of bud.

Weed-smoking celebrities sometimes surprise us. Kathy Bates gained fame by playing a creepy superfan in Misery. Recently, she’s amassed a new generation of fans thanks to her performance in the hit show Disjointed.

Bates plays a seasoned cannabis advocate who runs an LA dispensary with her son. Bates revealed she wasn’t so different from her character on Late Night with Seth Meyer.

Discussing preparing for the role, Ms. Bates said that she’s usually stoned when she reads the scripts. She also remarked that she often ends up in a fit of giggles while reading her character’s lines. As far as she’s concerned, smoking is part of her research for the role.

As public perception of cannabis consumption improves, celebrities smoking weed are speaking out about their love of cannabis and its benefits. These stars are able to affect change for the better and introduce more people to the positive aspects of cannabis.

If you’re curious about marijuana and live in a legalized state, why not try growing weed indoors? Cultivating your own marijuana is fun, therapeutic, rewarding, and the best way to educate yourself about this fascinating plant.